The Nathan Gremmo Community Fund Inc. was established in 2008 as a facility to deal with the increasing number of community projects that the Gremmo Family were becoming involved with. The establishment of the fund allowed the opportunity to ensure that these events could be managed with the same philosophy with which the family conducted their core business whilst not interfering with them.

The genesis of the organisation was a casual conversation with family friend Dr Jim Taggart OAM regarding a local benefit that both had a mutual association with. It was agreed that it would be beneficial to have a mechanism that could manage such events that would remove the requirement of individuals to undertake many of the logistical tasks involved while providing the necessary resources to ensure that these events were successful.

After discussing the possibilities of what could be achieved by the establishment of such an organization with the relevant professionals, and consulting with others who had experience in the field it was determined that the most effective way to ensure that the organization would be able to realise its goals would be to create a unique set of rules and objectives which were specific to what was hoped to be achieved.

The establishment of the Nathan Gremmo Community Fund Inc. also ensures that the wider community can have confidence that any events that the organization is involved with are managed efficiently and effectively through simple governance measures which the Community Fund adheres to. The Gremmo Community Fund Inc. has its Rules and Objectives registered with the Office of Fair Trading and has been granted Fund Raising Authority approval from the Office of Liquor, Gaming and Racing. The accounts of the fund are audited annually.

The Nathan Gremmo Community Fund is governed with the assistance of two external directors, Dr Jim Taggart OAM and The Honorable Alan Cadman OAM. Both Jim and Alan have vast experience in community involvement and fund raising, and are widely respected for their efforts. The Nathan Gremmo Community Fund Inc. is a non-profit organization and its directors, committee members and volunteers are not remunerated for their time and expertise. 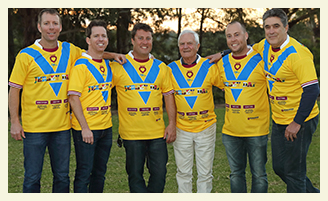